Posted by Jaydevanimator at 8:38 PM No comments:


This is Team VIP's first performance in favorite skit round.you can see the performance is always a boring one man show by nelson-the so called comedian. and the contents are extremely non vegetarian vulgar - we can't see it with our family. nelson telling something and laugh himself. and the chief judge trying to laugh and encouraging others to laugh. personally I can't see  any comedy in it. Always jagadheesh tells about family moral values;but in this case he forgot every moral values and words by himself.
Posted by Jaydevanimator at 1:40 AM No comments:

though the truth about points was like that, jagadeesh given the first price to team VIP.

About SMS in vodafone comedy stars

Director Baiju Melila and cheif judge jagadheesh never published the total number of SMS got for teams. they confidentially played a cheap play behind curtain. lacks of sms and millions of money of viewers wasted through this cheap play.
Posted by Jaydevanimator at 5:36 AM No comments: 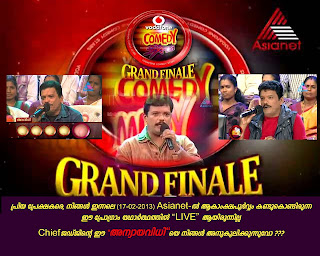 By Express News Service - THIRUVANANTHAPURAM
20th February 2013 09:23 AM
A popular comedy show aired by a Malayalam television channel has landed in a controversy with the second prize winning team alleging ‘foul play’ in the selection of winners at the show’s grand finale held recently.
Members of team ‘Four Stars’, adjudged the second best team of ‘Vodafone Comedy Stars’ aired in Asianet channel, alleged that the show’s chief judge Jagadeesh and director Byju Melila ‘sabotaged the judging process’ and pushed them to the second spot despite winning the maximum number of SMS votes and maximum overall marks.
“We got the maximum overall marks and SMS votes and came first in more than nine episodes while the team which was given the first prize was third in terms of overall marks. Also, they came first only in six episodes,” Four Stars’ team captain Ullas Pandalam told a news conference here.
“In the grand finale, there were four judges. While three judges could award 20 marks each, the chief judge could give 40 marks. Despite our repeated requests, the chief judge and the director did not make the marks awarded by other judges public, clearly indicating foul play,” he said.
Four Stars’ members said that they walked out of the show’s grand finale in protest but that portion was edited out of the show.
“The show which was touted to be a live telecast was in fact a recorded one,” they said, adding that they found it more honourable to part with the second prize of Rs 4 lakh than silently suffer the injustice.
“Over the last three years, many teams including ours cancelled many stage shows which was the source of our livelihood and suffered many hardships to participate in ‘Comedy Stars’. But we were paid a paltry amount of Rs 500 per show as travel allowance,” Ullas said.
Ullas said that they decided to hold the news conference to make contestants of similar shows aware of the ‘backstage sabotage’ that might happen in the final selection of winners.
They said that their aim was not to target a particular channel or individual but to highlight the plight of ‘hapless contestants’ who spent years for the success of various shows.

In most viewers opinion (through mouth, facebook and blogs )  Asianet again fooled all of the audience by the poor judgement on the final. One who watch entire vodafone comedy star can simply tell that really Team Four Stars deserves the first price in vodafone comedy star grand finale, But what happened is, one of the most betray in malayalam channel history, the judges gave the first price to Team VIP (once they are best team, but after  around 1 year they become stereotype and Nelson's non vegetarian dialogued ONE MAN SHOW.. ). but the judges always supports it even if there is no comedy. and the show become boring. at that time Team Fours Stars getting its track of verity comedy. They are really innovativ,Creative and consistent comedy make the show again full fledged and flew like a phoenix bird.
Posted by Jaydevanimator at 3:34 AM No comments: